Mark Farrell Wants to Demonize the Homeless for Political Gain 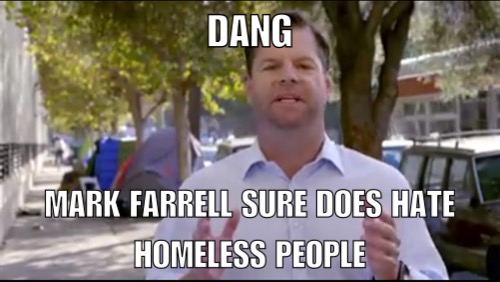 Dang, Mark Farrell sure does hate homeless people. Though apparently the District 2 Supervisor has no problem using them as fodder to propel his fetid political career. He authored this Prop amending the police code to make it illegal “to place an encampment on a public sidewalk.” SFPD would have the authority to remove an encampment after giving just a 24-hour notice and offering ‘shelter options’. As we know, though, the options are pretty limited. Authorities would either bus folks out of the City via the Homeward Bound program or give them housing for 24 hours in a temporary shelter if housing was not available at the Navigation Center. But, seriously, one night is not even 24 hours of housing. They could also could toss homeless people’s seized property after 90 days - but eep! right now there are reports of people's belongings being tossed right away.

San Francisco has approximately 6,686 homeless residents according to the 2015 count, though many advocates say that is an undercount as families and youth are underrepresented. About half of them sleep on the streets every night. The City estimates there are 500-700 homeless residents in tents. There are only about 1,300 adult shelter beds - with a huge waiting list for 90-day beds (~900 on the waitlist any given night). There simply aren’t enough resources. Even great efforts like the Navigation Centers suffer from a fundamental problem. To quote Street Sheet: “The problem with the Navigation Center model is that it is not particularly successful in linking homeless people with long-term permanent housing because there is no housing to be linked up with.”

Prop Q isn’t just cruel, it’s arguably unconstitutional. In August 2015, the Department of Justice announced that these types of ordinances criminalize the status of being homeless and violate the 8th Amendment to the Constitution.

People for True Homeless and Housing Solutions released a short video on Proposition Q, which breaks down Prop Q, and really highlights the absurdity of it.

Ultimately, this isn’t about helping homeless people. It’s about getting Mark Farrell’s name out there as a “homeless advocate” so that he can run for Mayor, similar to how Gavin Newsom did with 2002’s “Care Not Cash”. But it's more than just Farrell that deserve the blame: Prop Q was sponsored by Supervisors Wiener, Tang, Farrell ("Team WTF") and Cohen. Shame all four of them. We say fuck no.

What might be most frustrating about the fight over Prop Q is that it's distracting all of us from the measures that will actually fund housing for the homeless: Prop J, Prop K, and Prop S. Please vote yes on those three for real solutions to homelessness.

Prop Q: Demonize the Homeless for Political Gain - Fuck No 😡