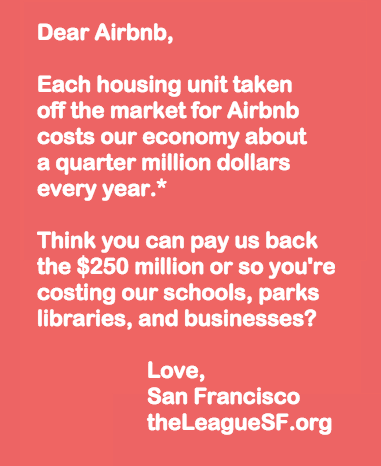 *Quarter million dollar figure taken from the report by Ted Egan, the City's chief economist. See page page 8 of this report, which says:

"The citywide economic harms associated with higher housing costs are fairly severe. According to the REMI model, removing a single housing unit from the market would have a total economic impact on the city's economy of approximately -$250,000 to -$300,000 per year. This exceeds the annual total economic benefit from visitor spending, host income, and hotel tax, given prevailing short-term rental rates."

We took a rough estimate of 1,000 housing units off the market for airbnbs times $250k per unit = $250 million. There are various estimates of more or less than a thousand full-time airbnbs. This Budget and Legislative Analyst estimates that between 925 and 1,960 units citywide have been removed from the housing market from just Airbnb listings, and between 631 and 963 private rooms that could be rented to roommates. The loss of roommate opportunities is particularly upsetting, because that's the most affordable non-subsidized type of housing in the City. Either way, the impact is big.

We fully support people occasionally renting their rooms or their whole place on Airbnb, but we need enforceable regulations to stop people from converting rent control housing into full-time hotels. That's why we're voting for Prop F!