Even Matt Cain Could be Interim Mayor: A Breakdown of Political Inside Baseball

Here’s your secret decoder ring for mayoral succession. The League breaks down the City Charter, definitions, process, and political inside baseball. 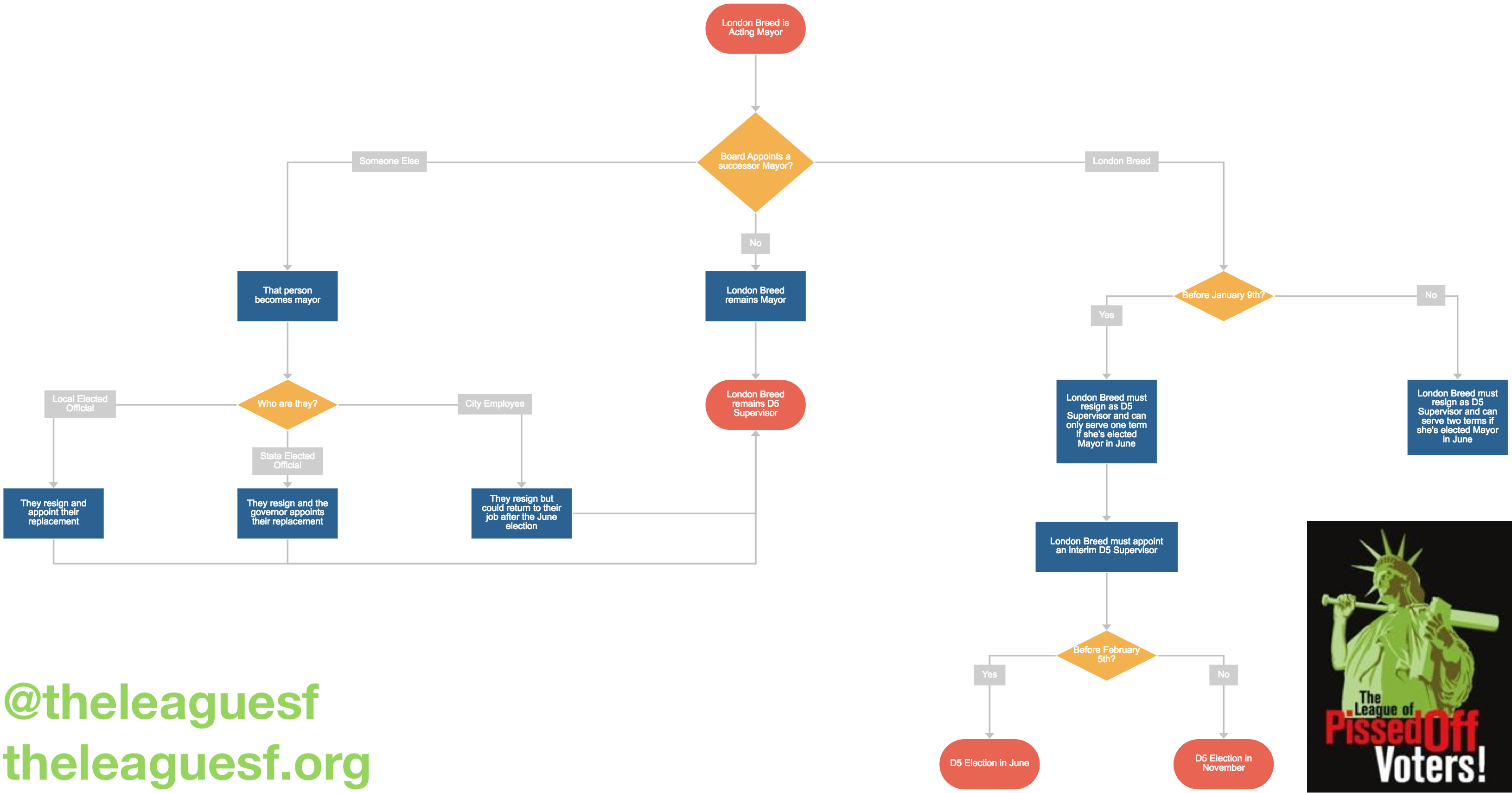 It’s been 14 years since San Francisco had a mayoral election without an incumbent! We think it's time.

There has been a lot of talk about what the City Charter says about this mayoral succession process and confusing terminology (Acting Mayor, Interim Mayor, Caretaker Mayor, Care Bear Mayor?), so let’s start with City Charter Section 13.101.5(b):

Interim Mayor/successor Mayor: The term “interim Mayor” isn’t defined in the Charter, but people are using this to refer to someone who is appointed by the Board of Supervisors to be Mayor until the June 5 election. When the Board appointed Ed Lee, their Motion #11-11 referred to this position as the “successor Mayor.” This person would be the for reals Mayor -- not “Acting Mayor” -- with the full paycheck and the requirement that they not hold any other job (City Charter, Section 3.100). The Charter doesn’t specify a deadline when the Board must appoint a successor, but it seems clear that they are supposed to appoint someone.

There is precedent for this: after the death of George Moscone and the resignation of Gavin Newsom. And even though the Board can delay appointing a successor and temporarily leave the Board President in place as Acting Mayor, that person continues to hold three positions, including head of both legislative and executive branches, with major obligations at both district and citywide levels. (See our possible scenarios below.) That’s why the Board of Supervisors voted to appoint Dianne Feinstein as successor Mayor, on December 5, 1978--eight days after she became Acting Mayor following the death of George Moscone. She resigned from her seat on the Board of Supervisors, and went on to win the election in November 1979.

And that brings us to...

Caretaker Mayor: In 2010, the term “caretaker Mayor” was proposed by then-Mayor, Gavin Newsom. Newsom said, “The board should pick a caretaker, not a politician. That’s my criteria1." The idea was that neither progressive or moderate factions of the Board of Supervisors would have an incumbent in the 2011 Mayor’s race. In January 2011, the Board appointed Ed Lee after he agreed not to run in November. But after months of assuring San Franciscans he’d return to his old job of City Administrator, Lee announced his run for Mayor in August 2011 following the “Run Ed Run” campaign.

Fun fact: In 2011 the Board passed ordinance #86-11 for Ed Lee that allows a City employee who is appointed Mayor to return to their old job.

Care Bear Mayor: Okay, we made that one up, although the Care Bears did have their own mayoral controversy.

Are you still with us? This shouldn’t be this hard, but it is, so…..

Let’s walk through the three steps of mayoral succession from City Charter Section 13.101.5(b):

Why is this sooooo complicated? Part of the complication is because the City Charter is kinda vague.2 They might not want to be too prescriptive in the event there’s not anyone to run the City after a catastrophic event.

Who wants to be Mayor anyway?

Turns out, a lot of people. At the time of publishing, 25 people have “pulled papers” to run for Mayor. Pulling papers means you’ve notified the Department of Elections that you intend to run for that office. It also prepares the department to complete the nomination process. Candidates have to turn over a few required items like signatures, financial declarations, filing fee, etc. before the nomination period ends at 5pm on January 9th.

In addition to Breed, some well-known names have already stated they’d like to be Mayor - Jane Kim, Mark Leno, Dennis Herrera, and Angela Alioto. There are others rumored to be interested - Carmen Chu and David Chiu.

State law says no one can vote for themselves if they have a political or financial interest, and Board Rules say 6 votes are necessary to elect a successor Mayor. That complicates the vote, since Supervisors Jane Kim and London Breed are both declared candidates for Mayor. If either of them try to rally enough votes to become successor Mayor, they would effectively need seven votes instead of six (since their own vote ‘doesn’t count’).

In 2010, there was so much disagreement that Supervisors and the Clerk of the Board created a special one-time process to choose the next Mayor - but not before then-D6 Supe Chris Daly called it a “clusterfuck,” saying it was too complicated and could make it harder for the Board to appoint a successor Mayor.

San Francisco tried once and failed to have a true caretaker Mayor. This is why we have a short list of super-qualified and capable women (mostly women of color) who we’d most definitely support as an interim caretaker Mayor:

We believe an interim process is the best way to build trust in our government and limit political shadiness. We would feel this way regardless of who was Board President or running for Mayor.

So WTF happens next? We made a list of possible scenarios. And we made a chart!

If London Breed is appointed successor Mayor by the Board...

If someone else is appointed successor Mayor: